A little while ago, my daughter Delaney snuck into the family room while my wife and I were watching the movie, Sully. You know the one based on the true story of Flight 1549 where Captain Chesley (Sully) Sullenberger landed the aircraft in the Hudson River after the plane struck a flock of geese. Needless to say - major Parenting Fail on our part - she was totally freaked out!

Fast forward to last week, my wife and I took my two youngest daughters 'The Littles' to Disney World. This was their first-ever ✈️ flight, and it was going to be a long one: from Kansas City to Orlando. Given the whole sneaking-in-and-watching-a-plane-crash movie, Delaney was not a happy camper. Not even Disney World was big enough bait to get her onto that plane without a full-blown meltdown.

Listen, I’ll be the first to admit it - I get a little queasy on turbulent plane flights. I had a trip not too long ago where the turbulence was so bad that people were falling out of their seats. It was upsetting, and I always think about it when I walk onto a plane.

There are a lot of things that cause the stock market to become turbulent.

The important thing to remember is that turbulence is uncomfortable - but it’s not the end of the world.

That doesn’t mean we can easily stop the queasy feeling we get when a plane gets turbulent or when the market drops. Your irrational emotions take over when it looks like disaster might strike - it’s the way we try to preserve ourselves in case something does happen.

Unfortunately, we can’t control our plane flight. That’s the pilot’s job. There are three things we typically want from our pilot:

Slow Down and Evaluate Your Thinking

When Delaney and I were about to get on the plane, I had her stop and take a few deep breaths. (Side note: Have you recently tried to calm down a hysterical five year old? Deep breaths don’t come easily). Slowing down for a second allowed her to consider what she’s really afraid of - and what the appropriate way to act was.

She knew that throwing a fit wasn’t helping - and if she didn’t get on the plane she definitely wouldn’t make it to Disney World. As cool as Kansas is - there’s no Cinderella Castle here. 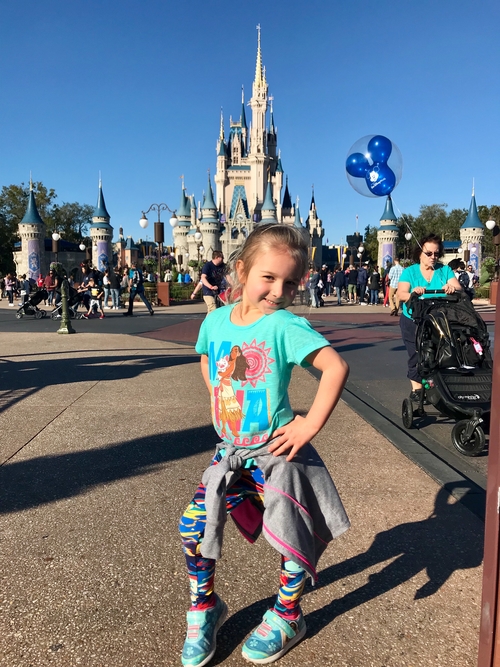 She knew that the options she was considering wouldn’t get her where she wanted to go, even though her instincts were telling her not to get on that plane. Her rearview mirror was still full of scary scenes from Sully, and that was scary.

Right now, your instincts are telling you to do the wrong thing. Given the recent market tumble, and with the 2008 stock market crash in our rearview mirror, you might be feeling a little bit scared right now. But your instinct to run, or to change your plans - or heck, even the final destination of your carefully planned retirement strategy - isn’t going to help you in the long run.

Our brains are psychologically programmed to deal irrationally with financial shocks. Only 20% of our brain is built to deal with analytical information. The other 80% reacts on pure emotion - and often leads to rash decisions.

We like to think that we are logical beings. We want to believe that we carefully weigh the pros and cons of each investing decision we make before we act. However, the truth is that we aren’t built to make logical decisions in these situations - we just start acting wildly, following the pack, and hoping we survive in the midst of our panic.

On Monday (2/5/18), the Dow Jones Industrial Average was down 4.6% or 1175 points, and it felt scary. People started reacting emotionally. The last time we had a Dow drawdown this big in a single day was August 2011. But you know what? It was only the 108th worst percentage drop in history. That means we’ve had 107 days that were statistically worse than this one. We survived those days, and we’ll survive these, too! Remember - turbulence doesn’t indicate a plane crash.

Before you make an emotional decision, take a step back and evaluate your financial plan. What’s your timeline? In all likelihood, you aren’t retiring tomorrow. And if you are, remember that your timeline isn't the date you hang up your hat because your nest egg has to last you, on average, another 30 years through your retirement years.

Instead of looking at the recent drop in the stock market as a dramatic setback, start looking at it as a small inconvenience. This is a bit of turbulence on a long plane ride ahead of you.

And remember, stock market pullbacks aren’t something new. As a matter of fact, they’re pretty normal. 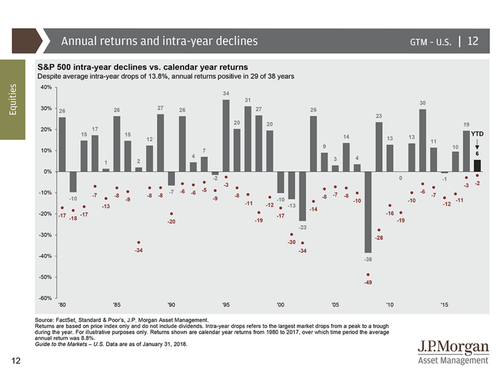 The average intra-year decline since 1980 of the S&P 500 has been 13.8%. More importantly, the stock market ended the year positive 29 out of those 38 years (or 76% of the time). Almost every one of those positive years experienced drawdowns of at least five percent. In many positive years, the drawdowns were at least ten percent, and in some greater than twenty percent.

It’s also worth noting that you haven’t actually lost anything until you sell while values are still low. If you choose to sell now because you’re having an emotional gut reaction to do something, you’re not giving your investments the chance to recover (which, statistically speaking, they likely will).

Focus On Your Destination

Timing the market doesn’t work. You can’t completely avoid the bad days - just like you can’t perfectly time the good days - only one thing is for certain: you have to stay the course through the ups and downs. If you stay focused on your end-goal rather than what’s happening in this moment, things will feel a lot better.

At the end of the day, Delaney stayed calm because she remembered where she was going - DISNEY WORLD! Disney World and meeting Queen Elsa from Frozen is way, way more important in the big scheme of things than a little bit of turbulence and bad memories of a movie that made her feel afraid. 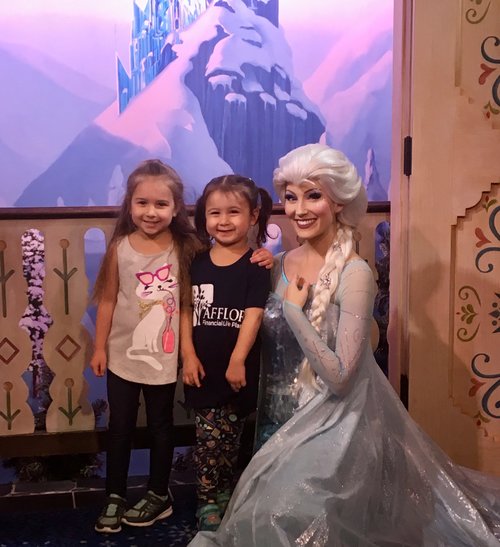 In your case, your retirement - and everything you’ve always wanted for your retirement - is more important than this moment. Stay focused on that before you do anything. And then, when you still feel like you should do something, remember: do even less than that. Hold still, the turbulence will pass.

In most endeavors, when you work harder and do more, you are better off. Investing is just the opposite! The more you trade, the more financial news you watch 📺 and the more active you are, the more likely you are to underperform. Take heart – laziness pays!

Of course, this analogy isn’t perfect. As your financial “pilot” I face two obstacles. First, I didn’t build the plane. If, enroute to our final destination, we encounter a mechanical difficulty - such as the account falling temporarily in value, don’t take it out on the pilot. We’ll cope with the mechanical difficulty the best way we can, and I have the education, training, and life experience to deal with it accordingly.

The second obstacle I’ll face as your financial “pilot” is that I can’t predict the weather. As I said before, there’s no way to time the stock market. And you can’t avoid the turbulent days. What I can do is get on my intercom, tell you to fasten your seatbelts, and guide you through the storm and land safely to the best of my ability.

When Delaney was freaking out at the airport I asked her if she would feel more comfortable flying the plane. She shook her head no. She’s never flown a plane before - there’s a way higher chance that she’d be unable to handle turbulence effectively than the trained pilot! Although, she was a lot cuter in the cockpit than our pilot. 😂 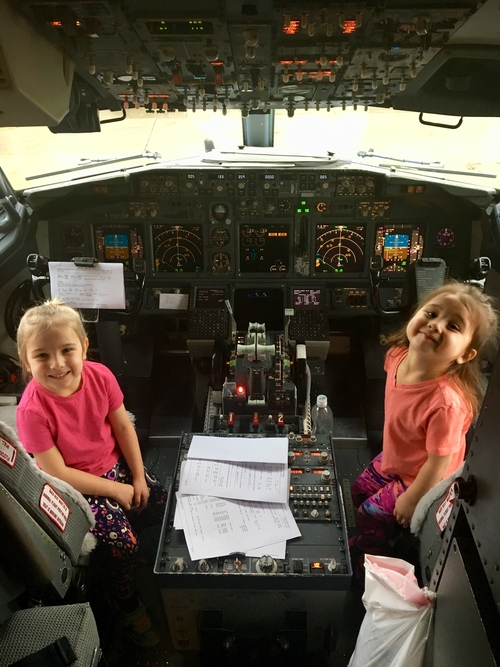 If you’re going to take emotional action during this market downturn, consider making that “action” be to work with a CERTIFIED FINANCIAL PLANNER™ professional on your financial plan. In the words of Benjamin Graham,

“The investor’s chief problem – and even his worst enemy – is likely to be himself.”

Having a CFP® in your corner can help to stop you from making an in-the-moment decision that you’ll regret later.

Getting on track for retirement doesn’t have to be confusing.

Sign up and I'll send teach you everything I know along with my FREE report, "7 Reasons People Fail at Retirement". 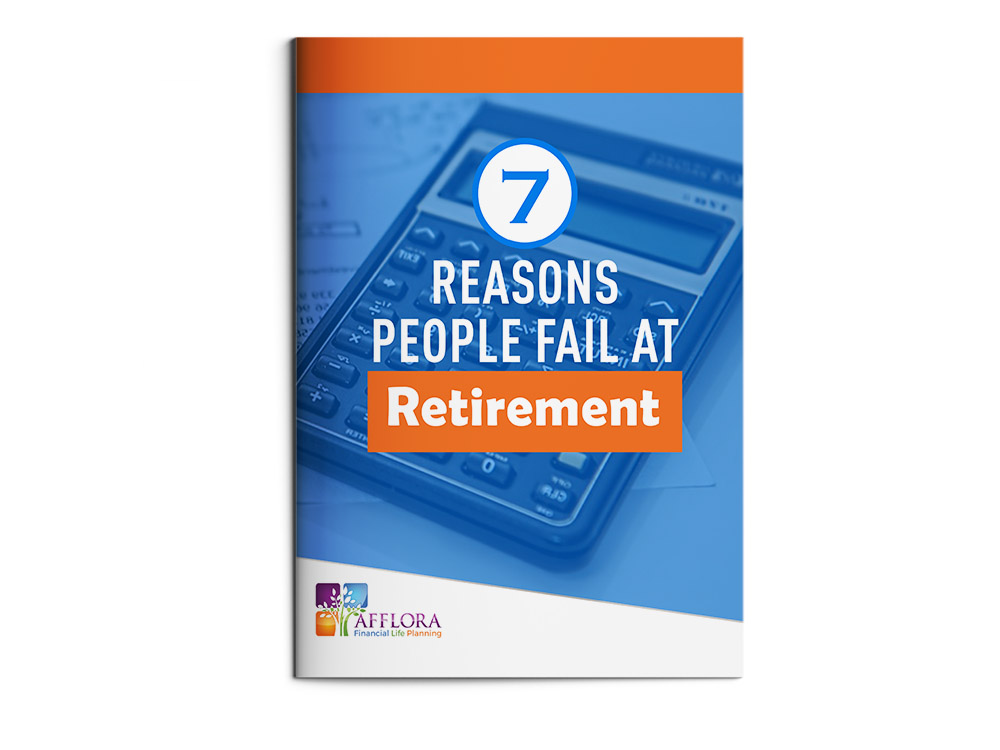 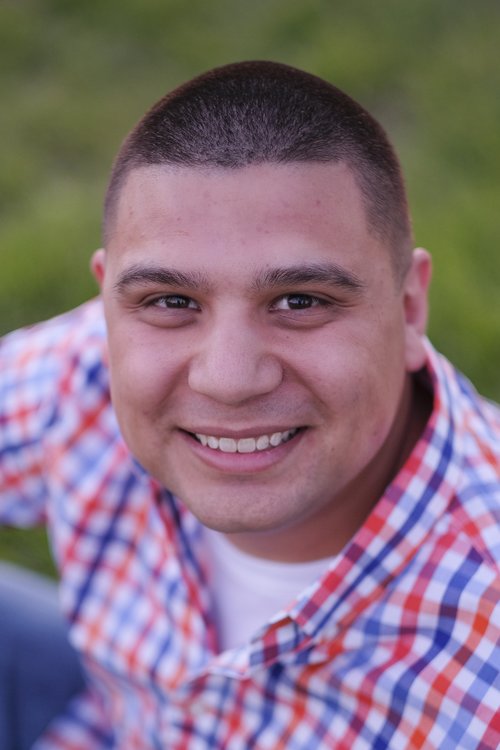 Desmond Henry is a fee-only CERTIFIED FINANCIAL PLANNER™ professional and founder of Afflora Financial Life Planning in Topeka, Kansas. He helps the retiring/retired plan their finances and invest their money. CLICK HERE to learn more.